We just had the best vacation since Maddie’s birth. I could not have dreamed up a better place for us to go. First, and foremost, I want to thank our gracious host. Please know that we feel incredibly fortunate for the opportunity to enjoy such an absolutely fabulous home.


We took tons of pictures because we have never been in such a beautiful and fun setting. The pictures honestly don’t do it justice either….There were bald eagles flying overhead, allligators and egrets in the lake bordering the property, and a beautiful golf course within view. And the inside of the house was spectacular too. Can you tell I enjoyed it?

Swimming in the Mickey Mouse pool

Maddie and her daddy on the little slide 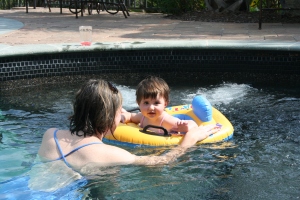 Fun in the boat 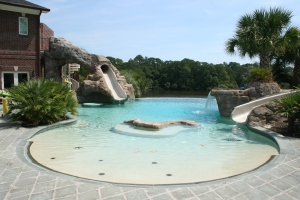 So you can see how amazing this place was. The big slide was incredibly fun, and so fast. Thank goodness I decided to try it alone before taking Maddie on it. Maybe in a few years….


Oh yeah…..the Ball. We had a really nice time there too. Maddie had a great time with my mom and Lance. We stayed gone for almost 5 hours….. And she did fine. So I guess we will have to go an a real date, by ourselves, sometime soon, now that we know she can handle it.


We did not take pictures before the Ball, because I had forgotten that getting all dressed up takes some time, and we were running out the door once I was ready. But we got a few once we got home.

Could not get Maddie to smile....

I missed my sweet pea

We just had the most fun and relaxing time. I left there reenergized and ready for the weeks ahead. It didn’t hurt that Maddie’s seizures have reduced in duration and intensity quite a bit while we were there. It appears that the Zonegran may actually be doing something. We upped the dose again today and are hoping to see even more improvement. So we wait…..


Brandon’s leave time before deployment begins this weekend so we will be spending some time at Kiawah and in Charlotte. I’ll end this post with a few more pictures of our amazing weekend. 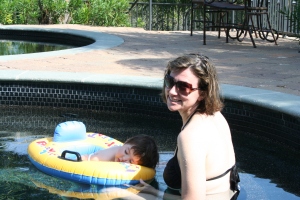 Catching a nap in the pool 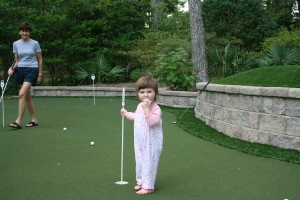 Maddie and my mom enjoying the putting green

Love to everyone,
Liz, Brandon, and a very happy Maddie

Brandon’s annual Marine Corps Birthday Ball is this weekend. We are having it a bit early because they deploy before the actual holiday. His Battalion Ball is in Myrtle Beach at a nice hotel and should really be a fun event. A great friend has set us up to use a family home there where we will stay for the weekend. The Ball is actually Sunday night so we are going to be down there from Friday until Monday. My Mom and Lance will meet us there to watch Maddie while we go to the Ball.

If you are not military, you would not know the significance of the Birthday Ball, but the Marines take this celebration seriously. We will get all dressed up in our finery. Brandon will wear his dress blues. In a normal year, by now, I should have spent countless hours trying on dresses. Not so much this year, but luckily I have lots of great dresses from my college years that I haven’t worn around this crowd. It has been a loooooong time since I last got all dressed up, but it should be fun.

Sadly, the last time I was supposed to get all dressed up was for the Marine Corps Ball in 2007. The day before the Ball (which my mom was also driving down to babysit for) Maddie was diagnosed with leukemia. So I am trying to ignore the similarity and get excited for my first night out with my husband since her diagnosis.

Yes, that is what I said.

I have not gone out with Brandon and left Maddie since her diagnosis. And, to make it worse, even before diagnosis, we had only left her once so he and I could go to a wedding when she was 7 months old.

So even though lots of other people will be there, we are going on a date this weekend. And it is going to be fun. I know Maddie will be in great hands. My mom has held her through a cluster of seizures before, and I know she and Lance will do everything they can to keep her happy (and hopefully get her to bed). There are lots of tricky things to deal with since Maddie normally sleeps with me and still nurses to sleep. Hopefully she will just wear herself out and fall asleep on my mom.

As far as Maddie’s seizures go, we are titrating up on the new med Zonegran. Her seizure activity decreased slightly when we first started the drug, but I can’t say that we’ve seen much improvement since then. The side effects of this one have been pretty rough for her so far: lack of coordination, trouble walking, excessive sleepiness, no appetite, slurring of speech, and to top it all off she is having what I’m calling night terrors, where she wakes up screaming bloody murder for a few minutes. Those bear an eerie similarity to the episodes we saw which led to the diagnosis of leukemia. So I’m experiencing a little bit if Deja vu all over again with the Ball this weekend and the nighttime wake ups. I am trying to keep my cool because we saw these night terror like episodes on Topamax too, which is an anti-epileptic drug which has the same mechanism of action. So I’m hoping (and praying!) that it is just one more drug side effect.

Can you even believe with all those side effects that we would keep increasing this medication? Some of the effects should lessen over time as her body gets use to the med and the dose. But, it is so hard as a parent to watch your child go through this, knowing that soon we may give up hope for this drug too. But our next step, the ketogenic diet, requires a 3 month commitment and is very very strict and complicated. But if Zonegran does not work, keto diet, here we come! I honestly have more hope for the diet than anything we’ve tried other than steroids. So as big of a step as it will be, we are ready for it. Of course, we’d still love it if Zonegran knocked out the seizures first.

So despite no major improvements, we have had a good week here in Camp Lejeune. Maddie just adores getting to be with her DaDa so much, and I’m enjoying it too! Having all three of us under one roof for more than a few nights at a time is awesome. We are even all sleeping together. It can be a bit crowded since Maddie hogs the bed, but we’ll take it. And we have a fun weekend planned. Then we’ll be back here together for another week. After that his pre-deployment leave begins and we may head further South to Kiawah to see my Dad around his birthday. So we have some good things planned for the next few weeks and we truly hope to enjoy all our time together with no medical emergencies. That would be very cool.

Love to everyone,
Liz, Brandon, and Maddie

I usually try to be pretty positive in my postings here. That is perhaps why I am just posting today rather than over the weekend.

After arriving back in Charlotte Thursday, I had put back on my “I can do anything” face and was ready to start our next drug. Late Friday into Saturday, Maddie had clusters of seizures of varying intensity every time she was awake all day and night. Her super strong seizure rescue drug didn’t work. It gave her a 45 min nap and then she woke up clustering again. And for some reason the med we wanted to start her on was nowhere to be found (we wanted the brand name Zonegran in a small dose pill).

By Saturday evening the Zonegran was found and we also added in a little Klonipin just for good measure. I’m being a bit flippant and I think maybe the super high level of seizures lately has got me on edge. I came home from Detroit focused on the road ahead, and I got quickly derailed by a dramatic increase in seizures.

We are sticking with our plan though, and though I cannot say it has anything to do with the Zonegran, her seizures have been slightly improved yesterday and today. And we have not had a repeat of the Fri-Sat marathon of clusters. I’ve already stopped the Klonipin because it dopes her up terribly. I think we are back to the same seizure schedule we had pre-Detroit, which was not great at all, but is a major improvement over this weekend.

We will increase Zonegran this Saturday and the following Saturday and hope for good things. But if they don’t come, the ketogenic diet is waiting for us in the wings. It is an extreme commitment and has some side effects, but if it works it will be worth it.

Brandon will finally be home from California this weekend. I think that will improve my mood mightily. It has been a long five weeks. And seeing how long it has seemed with the seven month deployment looming……not encouraging. I try to remind myself it could be worse.

Maddie and I are still in Charlotte after returning here from Detroit. We saw her Oncologist Wednesday and will go back there tomorrow for an infusion of IVIG. Her counts yesterday were pretty normal, but her immunoglobulin level was very low. That is a component of blood which measures how much immunity she has to keep her from catching things. So we’ll get a refill tomorrow before heading back to Jacksonville. We also had a long appointment today with the dietician at CMC who will oversee the ketogenic diet if we go that route. With that out of the way, all we have to do is pick a date to go inpatient to start the diet. Yes, more hospital time. Perfect.

On a related note, swine flu is causing death in a disproportionately high number of young children with epilepsy, cerebral palsy, and other neurological disorders. For more info read this CDC release. So we are going to be laying low again for awhile. I am still trying to decide if the vaccine will be safe for Maddie (some vaccines are contraindicated for children with seizures). Even if it is safe, the vaccine only works if her immune system responds appropriately, and that does not always happen in kids who have recently stopped chemotherapy. So we may hibernate until this flu season has passed. She has not weathered all this to die of the flu.

I will try to have a more positive message next time I post. Especially since we actually have some fun plans for next weekend. I think I just need my hubby back.

Love to everyone,
Liz